In the words of Mario, HERE WE GO! An iconic member of Nintendos gaming franchise, Mario is one of the most well-known and beloved video game characters in history. This plumber with an Italian accent would seem an ordinary man, if not for his journeys across the Mushroom Kingdom to rescue princesses and defeat dinosaurs! Before he fought dinosaurs though, Mario began his career in the video game Donkey Kong in 1981. After that, Shigeru Miyamoto created the first Mario game in 1983. Over the years, Mario has become a cultural icon and Nintendos flagship character. Almost every game involves Mario as he fights across the Mushroom Kingdom, grabbing coins, using stars, and saving princesses like Peach and Daisy from the likes of Bowser. Other games feature additional popular characters, like Marios brother Luigi, his trusty companion Yoshi, Toad, legions of Koopa Troopers, and more. We are no strangers to Marios quest or his games. If you are as much a fan of this plumber as we are, you do not want to miss the selection of Mario Bros. gear that we have collected, like Super Mario t-shirts, collectibles, jewelry, and more.
View Compare List
Sort by 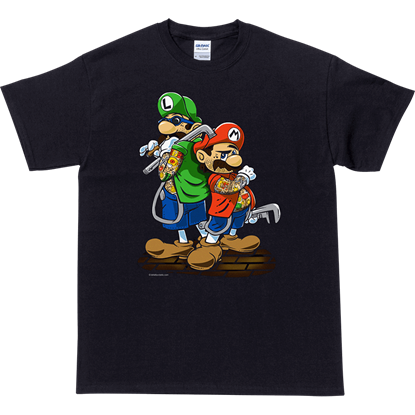 Item # BD-1004
Humorously depicting the classic video game characters Mario and Luigi in a less chivalrous manner, the Super Barrio Brothers T-Shirt is a colorful shirt which is perfect for expressing your sense of humor and gaming interests.
$15.50 $12.25