Angels are most often considered the divine emissaries of good in the world. They are frequently depicted as being sent by a higher power in order to spread a good, holy, or just cause in the world. They also typically are representative of a concept or principle in the world. Examples of those angels who represent positive and lasting principles are Tabbris the Angel of Self Determination, Rampel the Angel of Endurance, and Balthial the Angel of Forgiveness. Each of these angels represents something that is good in the world something that the world could use more of. Because angels can stand for such singular yet broad concepts, they can mean almost anything to anyone. Forgiveness does not mean the same thing to each individual person, just as the concepts of Endurance, Truth, and Faith do not always mean the same thing to others as they do to one specific person. That is what makes our selection of angels so great. We offer a wide variety of angel interpretations and styles throughout our angel statues and collectibles category, ranging from reverent angels and specific religious angels to fantasy angels and angel maidens. Because an angel can mean something different in different situations and to different persons, that makes them a fantastic gift. Give our angel statues and collectibles as gifts to friends and family to remind them of their positive qualities or keep them as personal reminders of qualities that should be sought and practiced.
View Compare List
Sort by 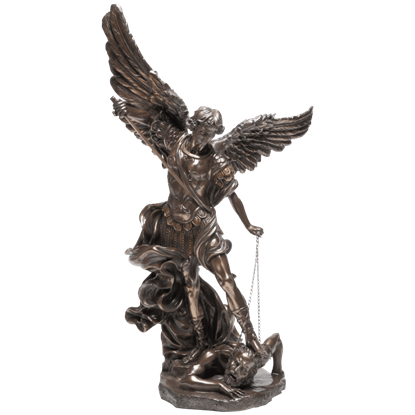 Item # CC7523
In the battle of good and evil, St. Michael led the armies of Heaven against Lucifers rebellion. Depicted in the 4 Foot St. Michael Statue, we see the heavenly general as he defeats an enemy of heaven.
$400.00 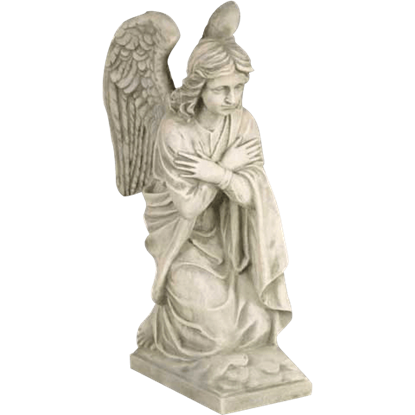 Item # OL-F7230-48A
The Adoration Angel Statue shows a kneeling angel with arms crossed over chest, humble and pious. Incredibly detailed, this handcrafted angel statue is made of strong and lightweight fiberglass and comes in a range of finishes.
$44.00 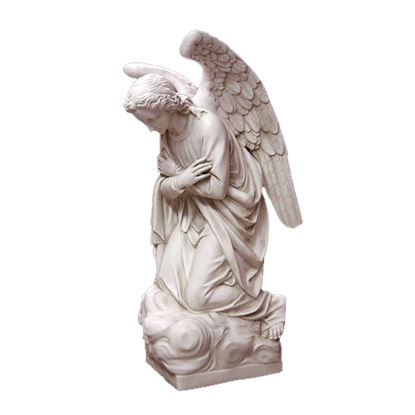 Item # OL-F68847
Head bowed and arms crossed over chest, this angel is the epitome of humble devotion. The Adoration Kneeling Angel Statue is a beautifully detailed, handcrafted angel sculpture in a variety of finishes for indoor or outdoor use.
$2,600.00 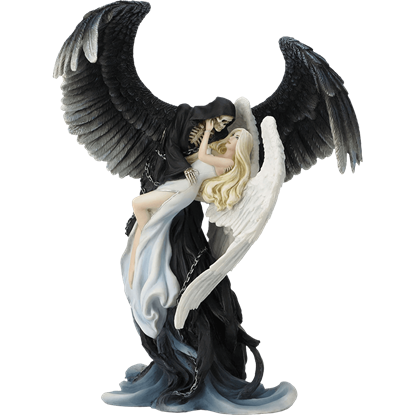 Item # WU-1933
Where there is light, there is a lingering shadow, and where there is darkness, the light looks to fill it. This cosmic attraction has been artfully rendered in gothic fantasy style by the darkly romantic Angel and Reaper Statue.
$90.50 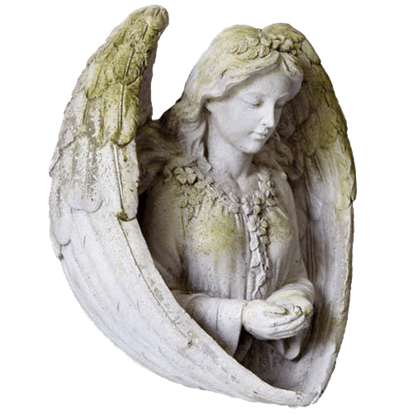 Item # OL-FS2277
The Angel Birdfeeder is a beautiful outdoor wall decor that depicts an angel maiden with her hands held in front of her, forming a small platform for the placement of seeds. Bring elegance to your garden decor with this wall angel.
$68.00 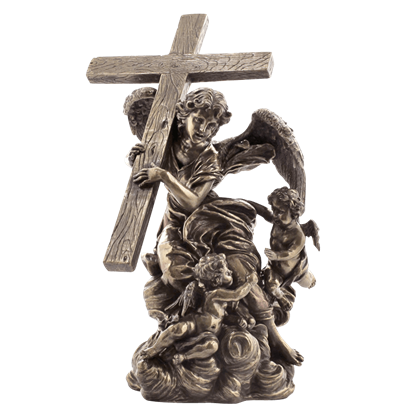 Item # WU-1190
Angels have long been a source of inspiration when it comes to art, having been featured in countless paintings and sculptures. This Angel Carrying Cross - From Alaleona Chapel Statue recreates one such piece from history.
$66.50 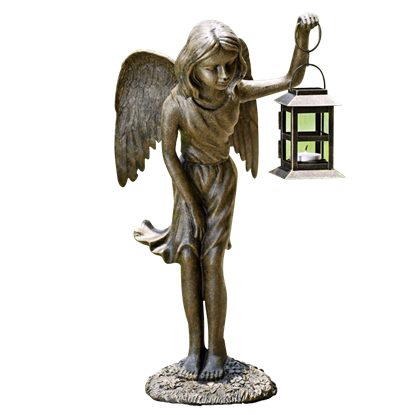 Item # SI-33604
This childlike winged angel girl holds her lantern aloft to light your way through the night. The Angel Girl Garden Lantern allows this young angel to illuminate and guard your steps with her hanging candle lantern.
$119.00 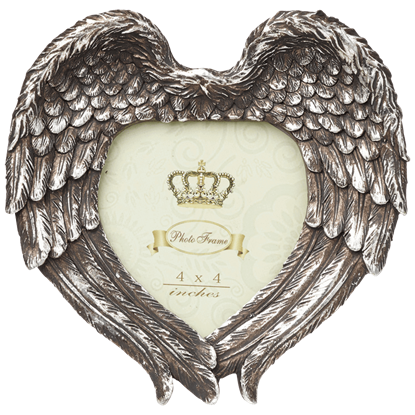 Item # AG-SA7
Often, it seems like the ones you love most in your life are angels sent from above to make your life better. If you see a loved one as an angel, why not put their photo in an angelic frame? Use the Angel Heart Photo Frame!
$20.00 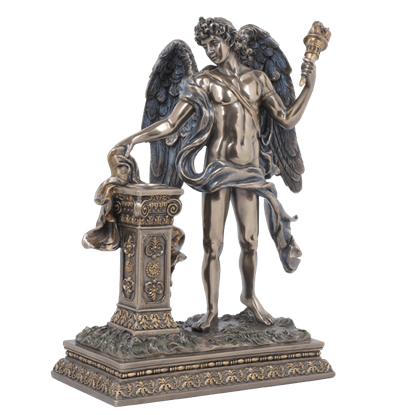 Item # WU-1161
Often, angels are seen as bringers of light. In this Angel Holding Torch Statue, that role is taken literally as this angel holds aloft a gilded torch, a light in the dark to all who need it, while standing before an altar.
$60.42 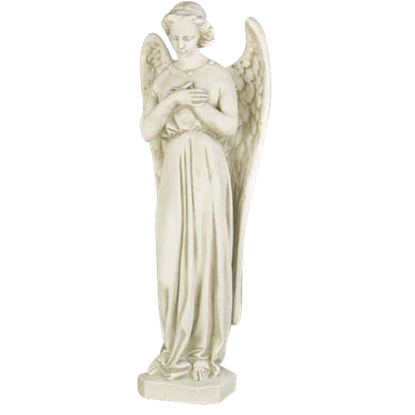 Item # OL-HF7384
The Angel in Cari Cross depicts a lovely angel woman with her hands delicately crossed over her heart and head bowed. This highly detailed, hand crafted angel sculpture makes a beautiful addition to any garden or home decor.
$100.00 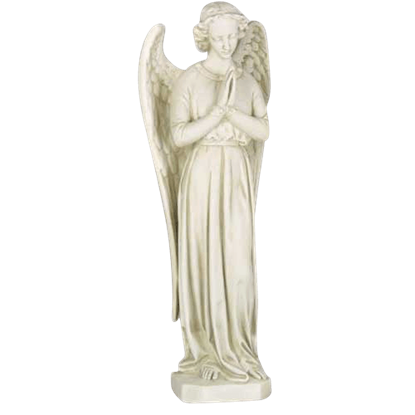 Item # OL-HF7385
Crafted by hand with incredible detail, the Angel in Cari Pray Statue depicts an angel in humble prayer, hands pressed together and head bowed. This large angel statue comes in a variety of finishes for indoor and outdoor use.
$100.00 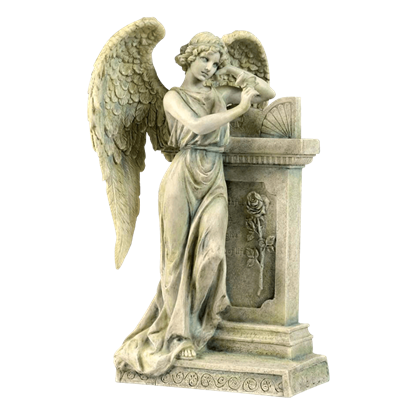 Angel Leaning On A Tombstone Statue

Item # WU-1168
Emotion can be a subjective thing. Take, for instance, this Angel Leaning on a Tombstone Statue, which features a detailed angel whose complex composition allows any who look upon her to see an assortment of feelings.
$40.85