The flail was a deadly medieval age weapon used in military warfare, however many flails were also used to administer punishment for crimes against the state and church. Flails have one or more weights attached to a handle by chain. Flails provided a great advantage to a horseman, because the horse's speed add momentum to the swing of the ball at the end. Flails were very difficult to block with a shield because the can bend around or over shields and amour. Disadvantages of the flail were controlling the direction and the space needed when swinging the flail to prevent the knight from hitting himself or other members of your army. We carry skull flails, spiked flails, ball flails, and traditional themed flails. Whether your flail preference is a full size museum quality flail or a mini pocket flail, we got it all.
View Compare List
Sort by 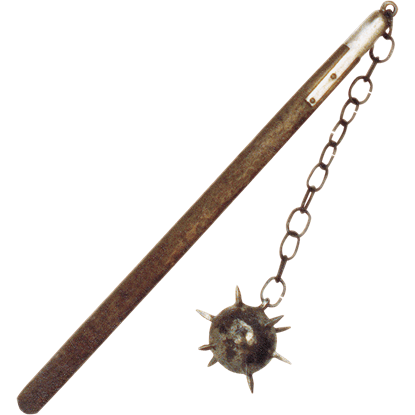 Item # ME-0123
A unique and devastating weapon used during the medieval period, the flail began as a weapon used by peasants and transformed into one wielded by cavalry. Display a replica of this blunt weapon with the 13th Century Medieval Flail.
$437.00 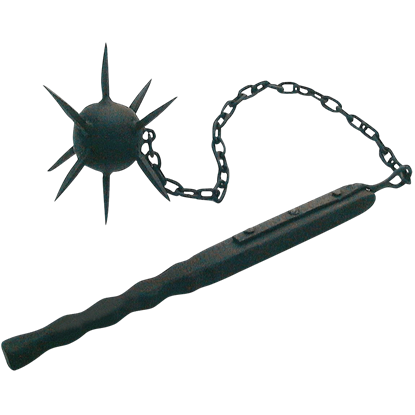 Item # ED2605
This flail masterpiece features a blackened steel ball with spikes over 2-1/2 inches long, attached to a blackened chain which is linked inside a hand wrought steel bar. The bar of this medieval weapon flail is secured to a wood handle.
$209.00 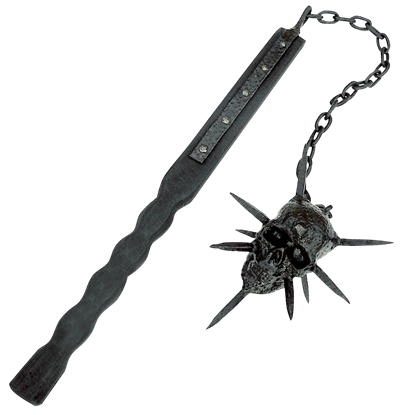 Item # ED2604
Our Skull Flail looks like one you might find in an old dark ages dungeon! Fully functional, this flail has a blackened steel skull head with spikes. It is attached to the wrought iron bar on the seared wooden handle by a sturdy chain.
$219.00 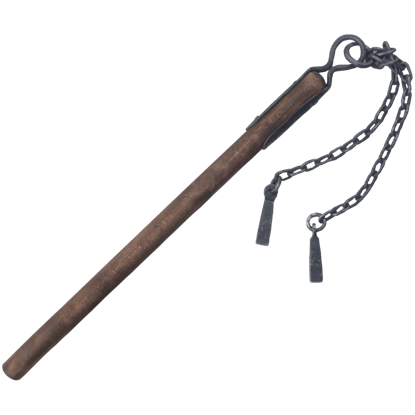 Item # XB3942
Owing its genesis to the medieval corn-threshing implement, the military flail was a fearsome weapon with its ability to reach out to a distance far exceeding the length of its shaft, its iron weights travelling at lethal speeds.
$52.00 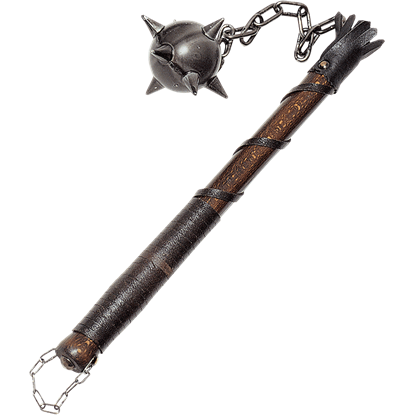 Item # ME-0040
An impeccable recreation of a popular weapon for medieval cavalry, the Large Single Ball Medieval Flail features the classic flail design of a long wooden handle with a chain connected to its end, which supports a spiked ball.
$15.00 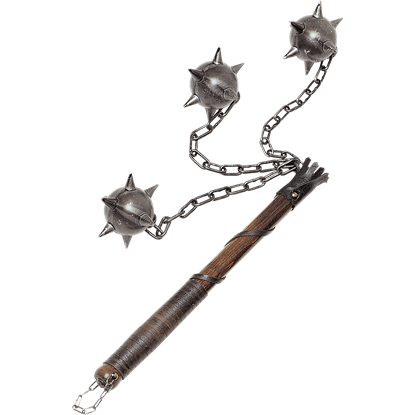 Item # ME-0042
Emulating the appearance of flails from used by cavalry in 14th century Europe, the Large Three Ball Medieval Flail is a weapon that requires immense skill to efficiently wield and can be devastatingly effective in battle.
$24.00 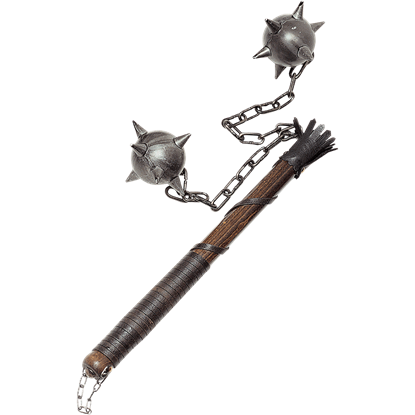 Item # ME-0041
Designed in the fashion of 14th century weaponry, the Large Two Ball Medieval Flail is an exceptional flail, which was a weapon favored by cavalry. The employment of the two spiked balls requires a strong and dexterous wielder.
$20.00 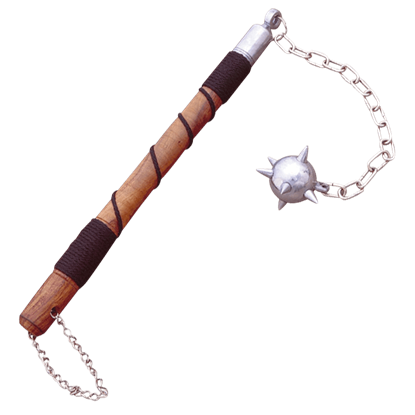 Item # ZS-200609
This flail has a heavy spiked ball made of cast metal to look more authentic. The Medieval One Ball Flail has an overall length of 18 inches. The medieval flail has a wood handle wrapped in cord and a chain attached to a spiked ball.
$14.50 $13.05 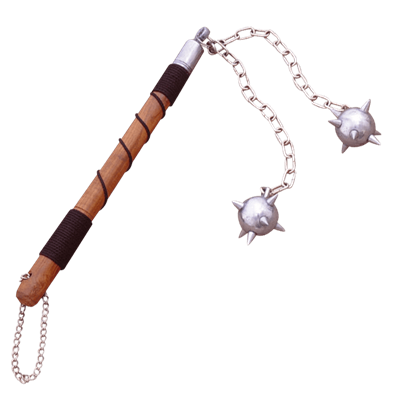 Item # ZS-200610
This flail has two spiked balls made of cast metal to look more authentic. The Medieval Two Ball Flail has an overall length of 18 inches. The medieval flail has a wood handle wrapped in cord and two chains attached to spiked balls.
$19.50 $17.55 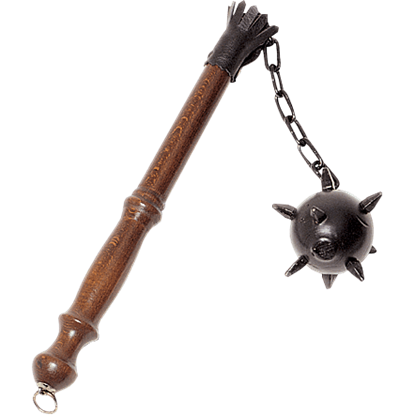 Item # ME-0046
Beautifully crafted in the likeness of a central European medieval flail, the Medium Single Ball Medieval Flail exceptionally displays a lesser known melee weapon from the era, which was favored by cavalry when in close range combat.
$9.00 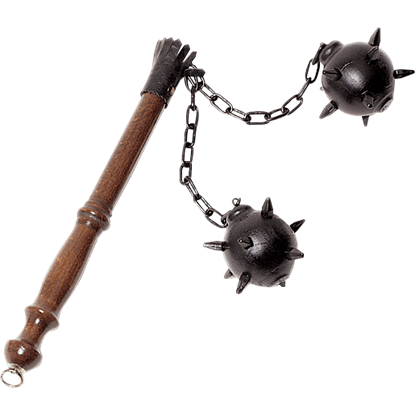 Item # ME-0047
An extraordinary replica of a flail from the Middle Ages, the Medium Two Ball Medieval Flail is a superb example of the vast array of weapons used during this period. The flail is a melee weapon that was predominantly used by cavalry.
$12.00 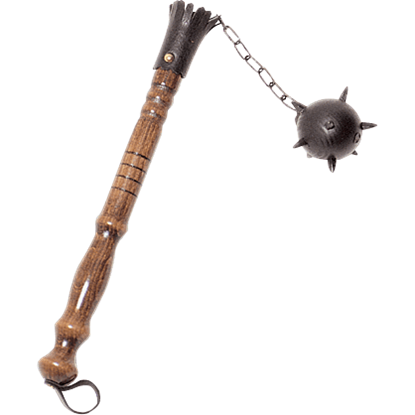 Item # ME-0043
Emulating a weapon used during the medieval era throughout central Europe, the Small Single Ball Medieval Flail is a delightful scale model of a flail. These were weapons that were mostly used by cavalry in tight quarter situations.
$4.00