Given the span of time that the Romans held their empire, it stands to reason that they developed extensive Roman currency and coinage, especially since each emperor wanted to have his likeness displayed. We offer a wide array of Roman coins based on historical coins found among ruins and museum collections. These Roman emperor coins come in designs cast in pewter with antiqued or gold-plated finishes. Our Roman coin replicas come in various denominations, from the small as to the major denarius and aureus. Many collectible coins even include detailed pamphlets, offering snippets of information about the coin itself and the Roman activities at the time of the its creation. These Roman coin packs are fantastic gifts for collectors, gamers, and reenactors.
View Compare List
Sort by 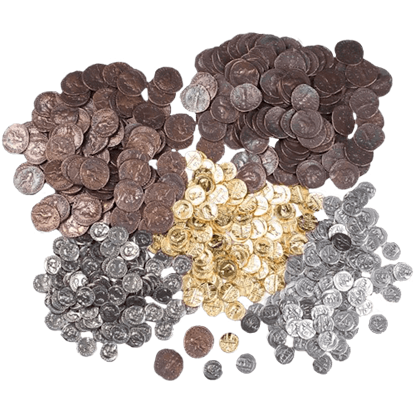 Item # WR-500MRC
This 50 Mixed Roman Coins contains a mix of 10 each of 5 different reproduction coins including as, dupondius, aureus and denarius. All our coins are made from pewter that is either antiqued or gold plated.
$102.00 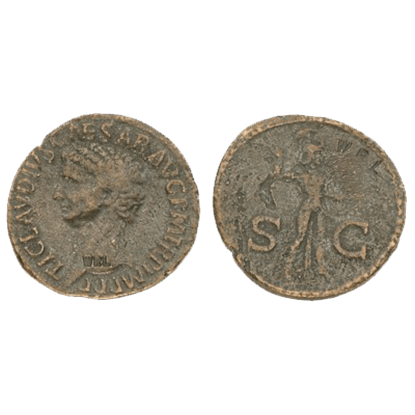 As Of Claudius Replica Coins

Item # WR-RCASC
This reproduction As coin depicts the bare head of Claudius on the obverse and palladium of Minerva on the reverse. These As Of Antoninus Pius Replica Coins come 10 in a pack and are great for collectors and enthusiasts.
$32.00 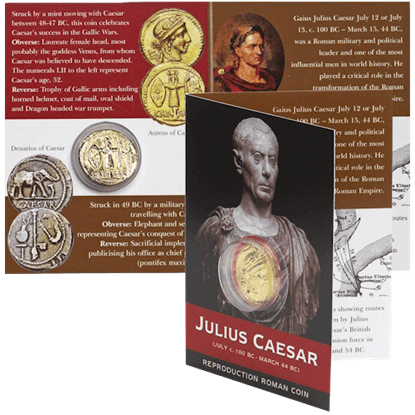 Item # WR-SRCP1G
Struck between 48-47 BC, this 22ct gold plated aureus reproduction coin is made from lead-free pewter and celebrates Caesars success in the Gallic Wars. It is a great collectible for Roman enthusiasts and collectors.
$4.50 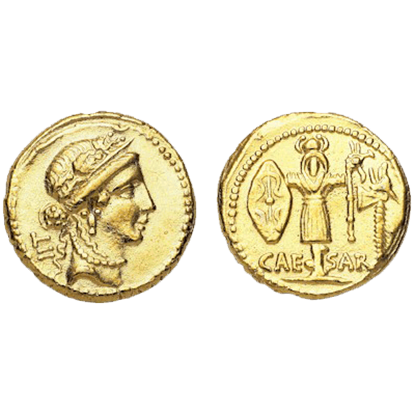 Item # WR-RCAC1
This reproduction Aureus of Julius Caesar depicts the female head of Venus on the obverse and trophy of Gallic arms on the reverse. These Aureus Of Caesar Replica Coins come 10 in a pack and are great for filling your coin purse.
$24.75 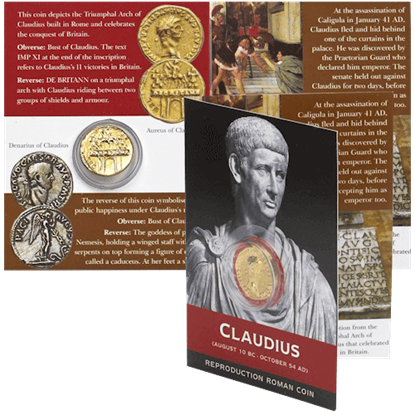 Item # WR-SRCP2G
This reproduction 22ct gold plated aureus coin is made from lead-free pewter and depicts the Triumphal Arch of Claudius, built in Rome and celebrates the conquest of Britain. It is a great collectible for Roman enthusiasts.
$4.50 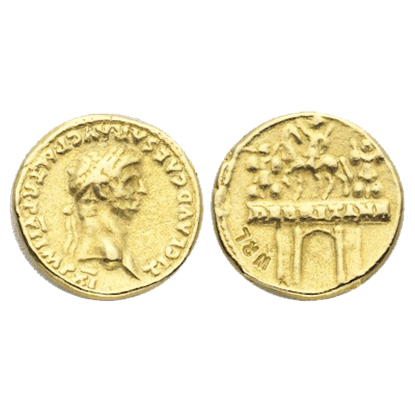 Item # WR-RCAC
This reproduction Aureus of Julius Caesar depicts the female head of Venus on the obverse and trophy of Gallic arms on the reverse. These Aureus Of Claudius Replica Coins come 10 in a pack to fill your coin purse.
$24.75 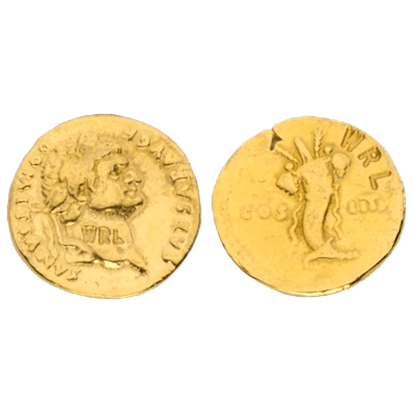 Item # WR-RCAUD
This reproduction Aureus coin depicts the laureate head of Domition on the obverse and upright cornucopia on the reverse. These Aureus Of Domitian Replica Coins come 10 in a pack and are great for collectors.
$24.75 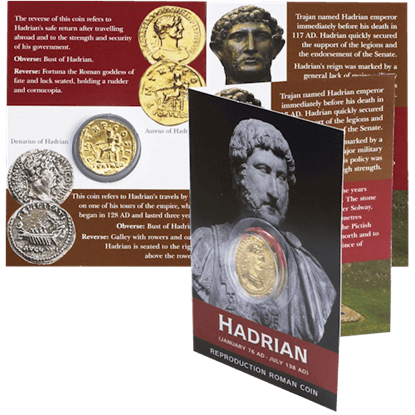 Item # WR-HACP
This reproduction 22ct gold plated aureus coin is made from lead-free pewter and refers to Hadrians safe return after travelling abroad, as well as to the strength and security of the Roman government.
$5.00 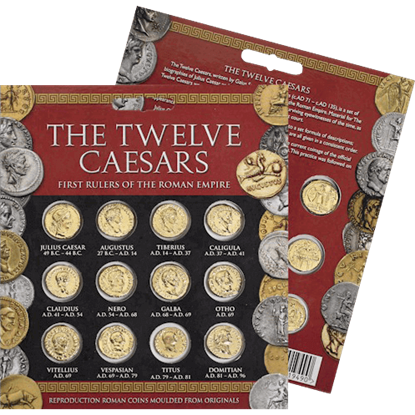 Item # WR-TCGCP
First issued by Julius Caesar, the aureus was the standard golden coin of the Roman Empire until Constantine. The Caesars Aureus Coin Pack includes twelve different collectible coins modeled on those of the various emperors.
$34.00 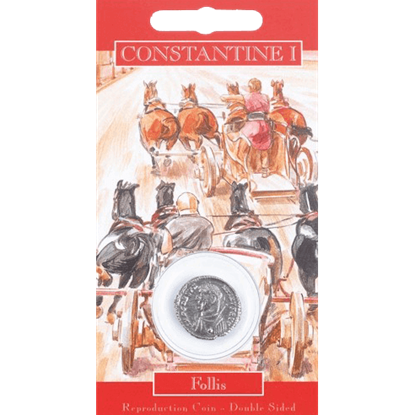 Item # WR-SCOCP
Our reproduction Follis of Constantine I was struck between 306-337 AD and shows the laureate bust of Constantine on the obverse and a military gate with guard on the reverse, which suggested public security at a time of unrest.
$4.00 $3.60 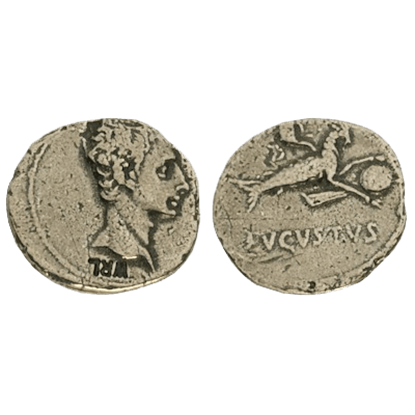 Item # WR-RCDA
This reproduction Denarius coin depicts the bare head of Augustus on the obverse and Capricorn with a cornucopia and globe on the reverse. These Denarius Of Augustus Replica Coins come 10 in a pack and is great for enthusiasts.
$19.75 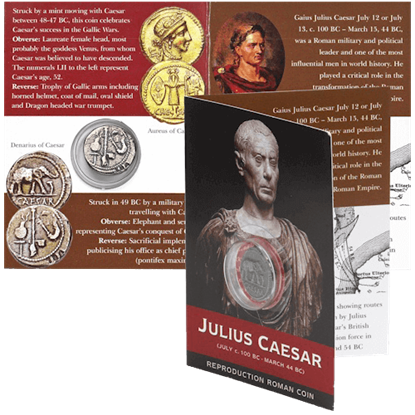 Item # WR-SRCP1P
The coin has the Emperors name and an elephant trampling a serpent on one side and a simpulum, sprinkler, axe, and priests hat on the other, publicizing his office as chief priest. It is a great collectible for Roman enthusiasts.
$4.00